The OTHER Side of the Camera

A wedding is a great thing. It’s the beginning of “US” where there used to be just “you” and “me.” To photograph such a powerful event is quite an honor, and one we never take lightly.

In preparing for an upcoming Bridal Show, I had the pleasure of scrolling through some of Frank’s 2008 weddings when I happened upon this fun shot. The bride had requested Frank photograph the entire day: hair and makeup at the salon, off to lunch and then on to the ceremony location. She had so cleverly designed rhinestoned tank tops to designate everyone’s status in the wedding party: Bride, Maid of Honor, Bridesmaid, Mother of the Bride, etc… Frank traveled with them in their limo to catch all the laughter and fun. 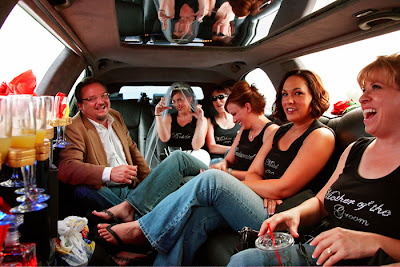