KALEIGH IS BRINGING THE HAT BACK

Frank, the children, and I were watching the movie VALKYRIE the other night. Without giving the story line away, Tom Cruise’s character suffers injuries that cause him to lose fingers and one of his eyes. (I think it was his right eye, but I don’t remember. Tells you closely I was watching) What I do remember was the scene in which the wife of Tom Cruise’s character arrives at the hospital to see her husband for the first time after the accident. It was during this scene that two things popped into my head: 1. She must be really short to make Tom Cruise look tall and 2. What a great hat she’s wearing!

When did we stop wearing hats? I suspect it was the late 50’s, early 60’s. People were walking less and using their cars more; they didn’t need the hats as they spent less time out in the open. After all, hats were used to protect the head while outdoors, and still are, which is the reason ballcaps are still so popular. Men’s hairstyles were longer, and hats became “old.” In fact, James Bond wore a hat in his first two movies, but by the third, he was hat-less, unless you count the golfing scene.

I, for one, hope the style rebounds. Maybe it’s because I’m a girl, but I LOVE hats. Big, floppy brims, feathers, bows…the bigger, the better. And Kaleigh agrees with me.

Kaleigh came into the studio with her parents, Kristin and Brian, and her big brother, Brennan. I think Kaleigh is going to influence the fashion world, ’cause she sure was working it in her oversized floppy hat complete with green polka-dots and bright pink flower. 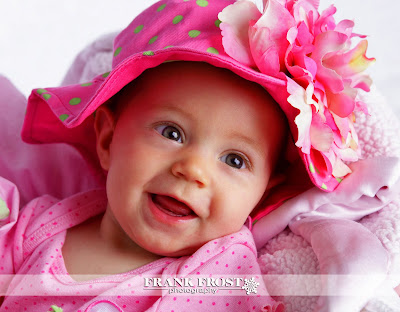 I’m counting on you, Kaleigh. You might just be the face that “brings the hat back.”