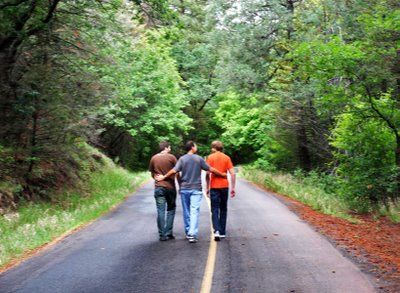 A very wise woman once told me that the purpose of parenthood is to work yourself out of a job. Now that might sound good printed on the side of a coffee mug, but the reality of that statement is much harder, especially when your child has one foot out the door.

This session of a father and his two sons was taken two weeks before his eldest left for Turkey as part of a 9 month international student exchange program. Nine months is a long time to be away and the impending separation was foremost in their minds. Midway through the session, Frank asked them to go on ahead down the road. As they began to walk, dad put his arms around the boys, as he had a thousand times before. As they continued on, laughing and talking, Frank snapped this image.

A road. An unknown future. Two sons on the verge of adulthood. And a very proud father, still protecting, still loving, still guiding.

« We Love What We Do
Downtown Attitude »

We wish for you an imperfect Christmas Eve. The k